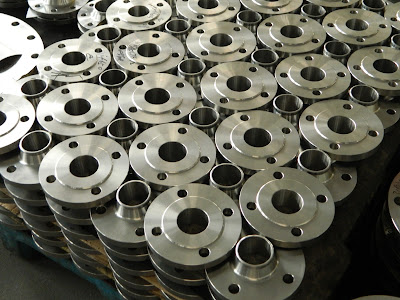 In the flanges sector, prices remained essentially stable in March. For the first time since October 2016, the upward trend came to a standstill. In terms of the beginning of the month, the price was very low, and thus it had settled at about 40% price increase.

Since the price of the raw material P250GH remained largely stable in March, the highly-anticipated price stabilization for flanges made of carbon steel finally came.

This stabilization almost occurred on the announcement, as it was generally considered to be at the end of the first quarterly 2017.

The price of iron ore fell by 16% compared to February.

The raw material for stainless steel continued to rise; But only in a moderate, single-digit percentage range. It is, however, expected that prices will drop in the near future.

March was more difficult for manufacturers in China due to ongoing production restrictions. The Chinese government ordered numerous plant closures for reasons of imitation reduction.

Actually, the thick air, caused by the coal kilns of the manufacturers, should be a thing of the past. Last year, the government introduced the switch to gas ovens to significantly reduce the emissions.

But in the Middle Kingdom there was a not unusual middle way. Although not fixed, but tolerated. The large manufacturers installed the required gas ovens on the deadline as of the cut-off date. But only one. Because the new furnaces are expensive and gas is much more expensive than the heating of coal. At the same time, each manufacturer kept their coal kilns and drove two-way.

But this was the end of March. The government set up an Inspectorate Commission and traveled through the provinces to search for traffickers. If the emission limit values ​​were not complied with, an immediate production stop was ordered.

This had the consequence that there were considerable delays in deliveries. These were reinforced by the scarcity of the raw material. Procurement is made more difficult after several steelworks have closed their doors in recent months.

Even if, from the EU’s point of view, steel, plate and other steel products are not sufficient to protect the EU’s domestic industry from anti-dumping prices, the measures taken by the Chinese government to reduce overcapacity. This does not apply to the area of ​​the flanges. Indeed, there is not enough capacity in Europe to cover the need for flanges at all. Europe is dependent on imports.

Factory closures, production stoppages and material shortages will lead to longer delivery times in the future, even if our Chinese partners assure us that delivery reliability has been met.

The positive trend of the last few weeks in the order intake of the steel industry also continued in March. A crisp impulse, however, is not yet.

The EU is currently negotiating an update of the EU Anti-Dumping Regulation. This measure aims to protect the EU internal market from steel products at dumping prices from China. This is the intention of the EU to provide for the event that China should be given the status of a free market economy after the expiry of the WTO Protocol in December.

Münster’s forecats or my view into the crystal ball

The market is now hoping that the stability will continue and prices will not return to a low level, as in the second quarter of 2016.

This would be fatal, in two respects, because, on the one hand, the traders, who in the meantime had (and had had to) stockpile their stores, would have bought the goods at the wrong time and would have to accept sharp losses on sales. On the other hand, all unanimously welcome the price increase as a step the right direction.

If prices remain stable at this high level, prices will gradually be on the market and thus with the end customers. And that would be good for all of us.